Amwell Gravel Pit (or Amwell Quarry Nature Reserve to give it its full official name) is located in the Upper Lee Valley.

By Car: Leave the A10 heading towards the A414 and at the roundabout take the B181 towards St Margarets. Take the second road on the left - Amwell Lane (just before the level crossing) - and after a kilometre park on the right at TL377122. Follow a track across the railway line to the lookout point at the northern end of the reserve.

By Public Transport: Take a train from Liverpool Street station towards Hertford East and disembark at St Margarets station. On the east side of the station follow the road - River Meads - northwards until the lock. Walk north for a kilometre towards the lookout point with the reserve across the canal on your right. (Someone keeps editing this back - please note the gate through the fence at the north end of River Meads is locked and there is no access, access is along the canal to the east of the station I have changed this twice but someone feels they know best - there is also not a circular walk around the site as the eastern bank is both private and fenced off)

Access: Most people only watch from the lookout point although there is a circular walk around the reserve with a hide at the northern end. There is also another pit on the western side of the railway line.

It should be noted that not all of Amwell GP lies within the LNHS Recording Area, for example the Great Reed Warbler was outside of the Area. The area south of the line on the map below (including the Viewpoint) is within the LNHS Area. 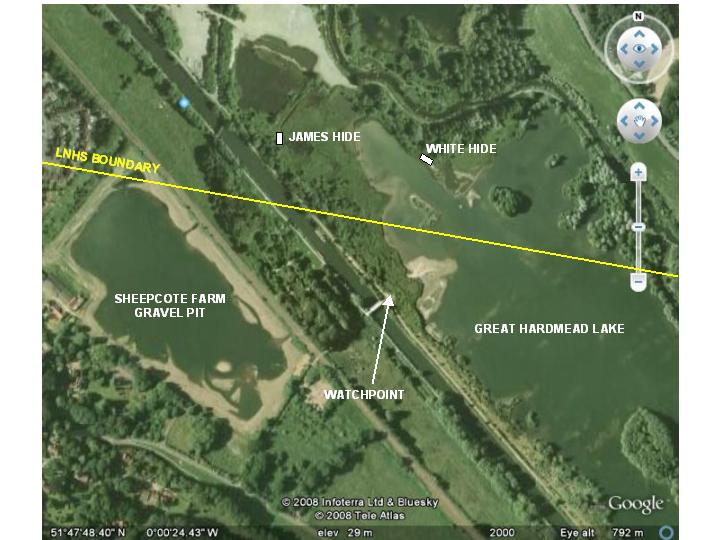 Winter: A reliable place for Smew, usually including a few drakes. Other ducks such as Wigeon, Teal, Goldeneye, Pochard and Tufted Duck should also be present. Bitterns can sometimes be seen, typically at dusk. There is a roost of larger gulls, often including Yellow-legged and Caspian Gulls and very occasionally Mediterranean Gull. Little Egrets roost on one of the wooded islands. Siskins are sometimes present in the surrounding trees.

Spring/Autumn: Amwell is probably the best place to observe migrating birds in the Lee Valley, especially raptors and waders.

Retrieved from "https://londonbirders.fandom.com/wiki/Amwell_GP?oldid=116611"
Community content is available under CC-BY-SA unless otherwise noted.